The most recent news...

Special Thanks to the Marcus Family

This 1951 M38 Willys Jeep was restored and donated to the museum by Flagstaff resident Edward Marcus in honor of his father Lester W. Marcus USMC a WW II member of the 6th Marine Division, platoon 629 who saw service in Okinawa and occupation duty in Yokosuka, Japan. The jeep identified by unit markings as a vehicle, of the WW II 158th Regimental Combat Team, represents the museum and distinguished history of the combat team in both the Flagstaff Armed Forces Day and the 4th of July Parades and will see future use in local school visits. We are very fortunate to have this accurately restored jeep as a major addition to the military history we represent. Our sincere thanks to Edward Marcus for his work on the restoration and his donation of this famous military vehicle. 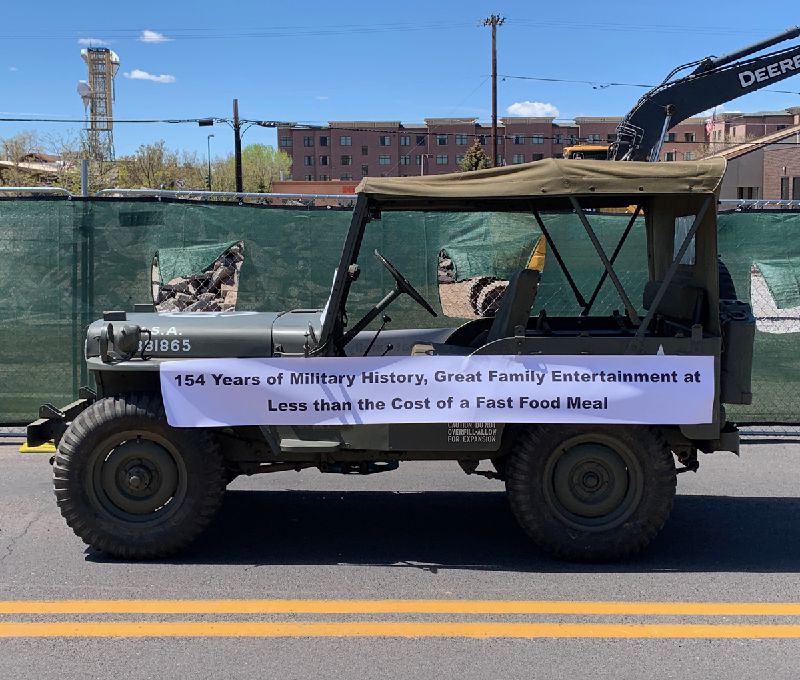 Jeep in the  4th of July parade 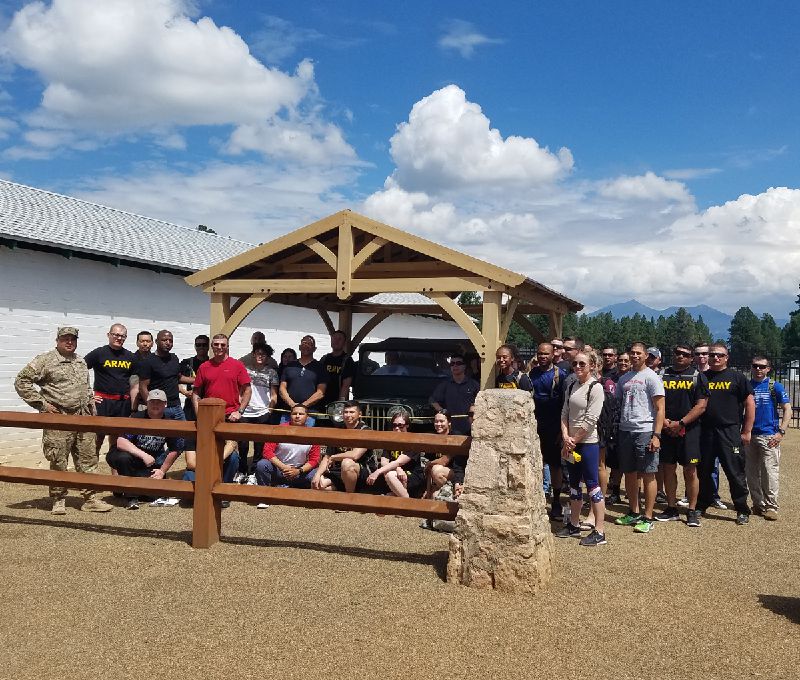 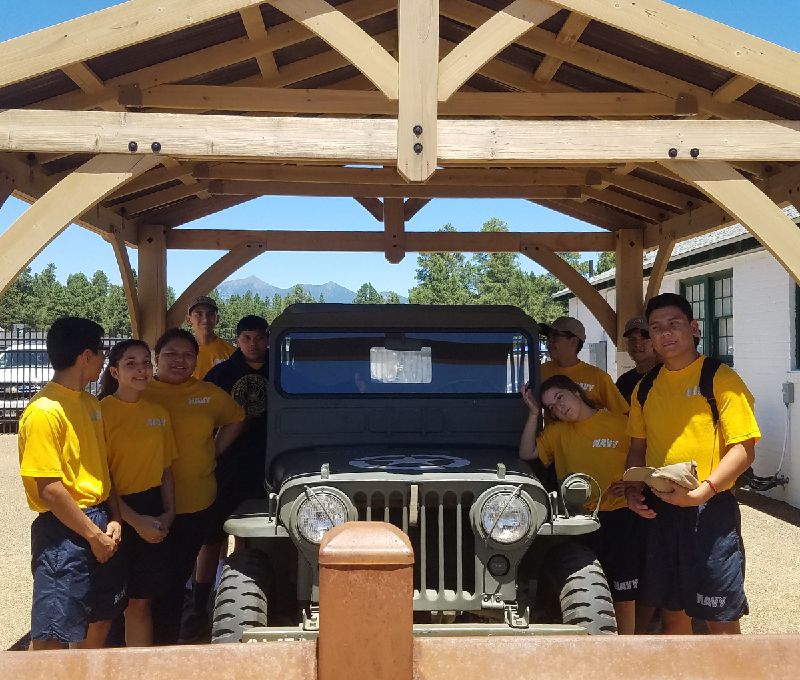 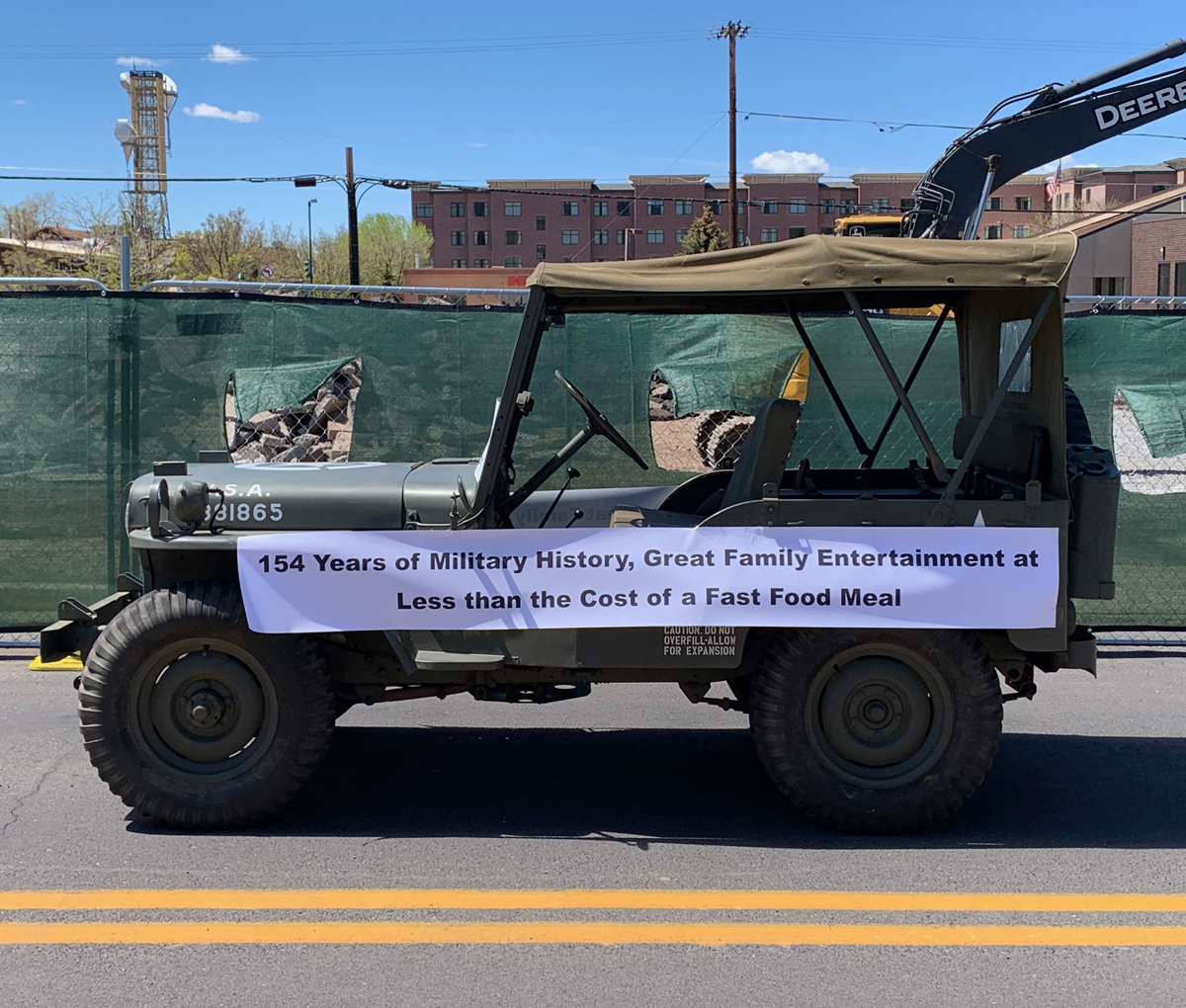 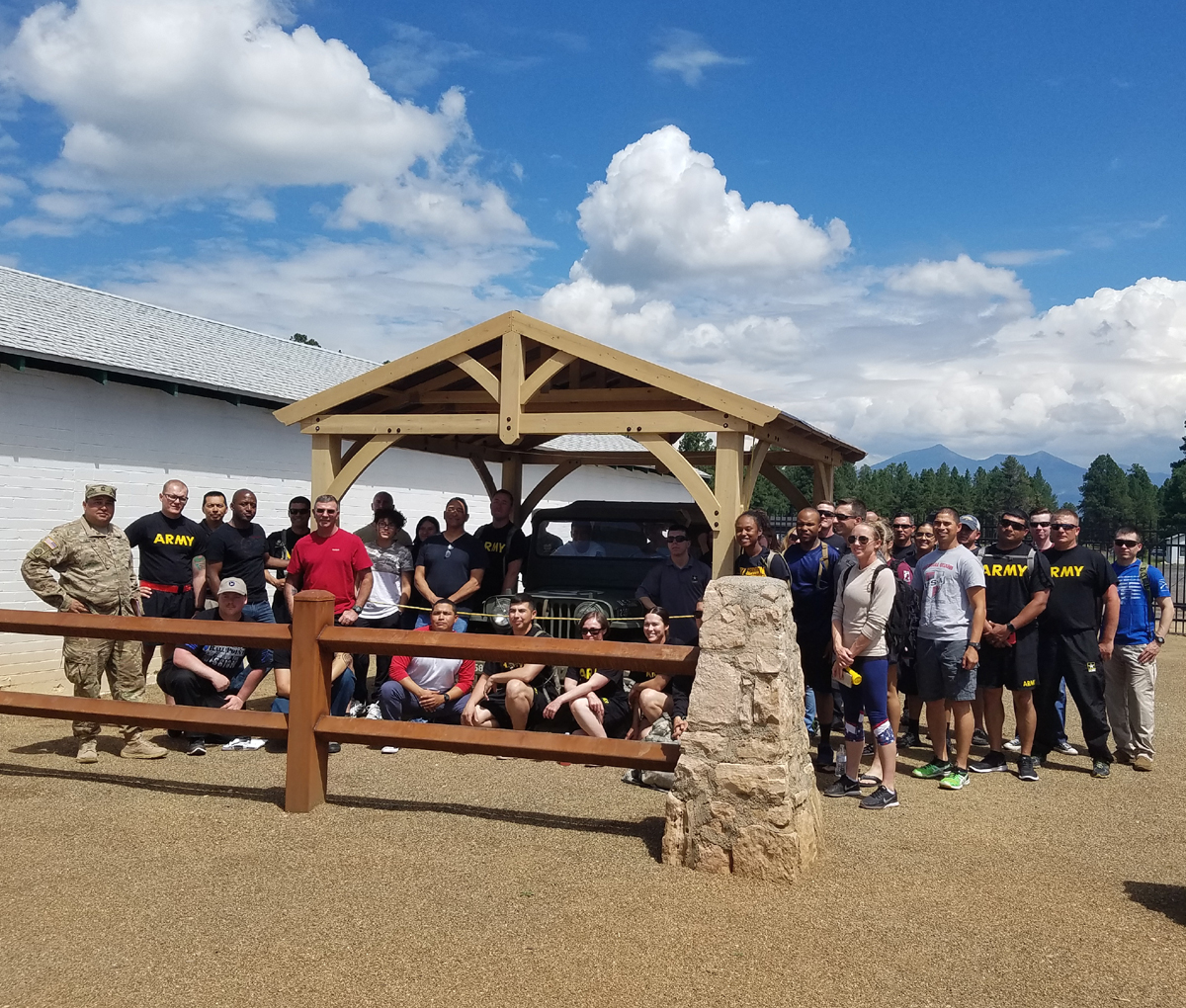 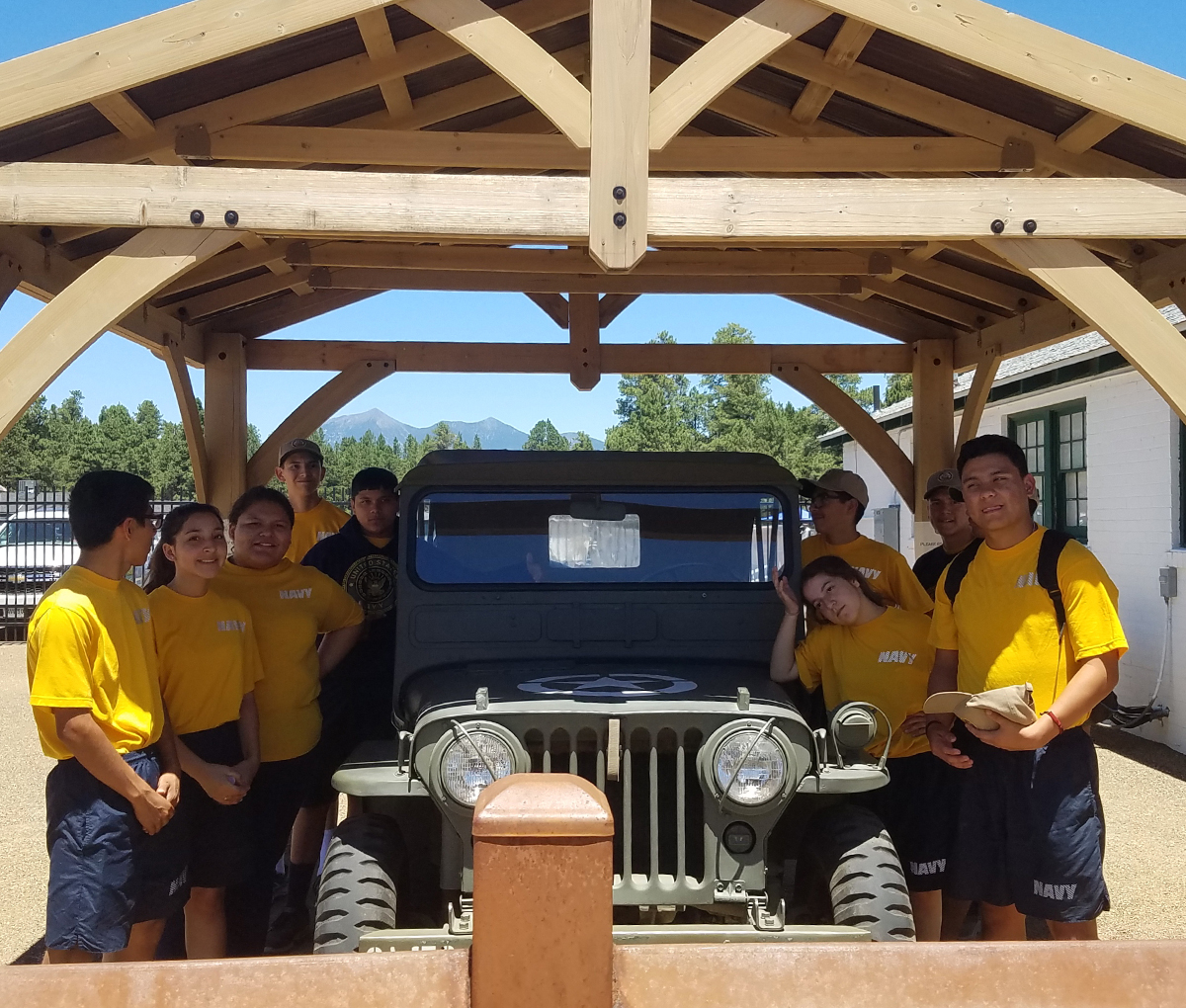 was produced by the Smithsonian’s National Museum with generous support from the San Manuel Band of Mission Indians.

Native Americans have served in our nation’s military since colonial times and serve today at a higher rate in proportion to their population than any other ethnic group. Patriot Nations tells their story.

During the month-long exhibit in Flagstaff Arizona - at the Coconino County Park in two of the original buildings - at Fort Tuthill, the Museum invited Arizona's 22 tribes to participate by bringing their military history alive. All seals and over 15 Tribal flags were on display. Each weekend a different Tribe set up displays in our Arizona Room and Native American veterans. Their families greeted over 1175 visitors. Veterans from the Post 114, Bushmasters; Post 84, Ira Hays; Post, Hopi and Code Talker Peter MacDonald from the Navajo Nation were on hand with demonstrations, color guards, dancers, talks on Hopi Code Talkers, songs and more. Fort Tuthill provided docent-guided tours of the Museum at no cost. 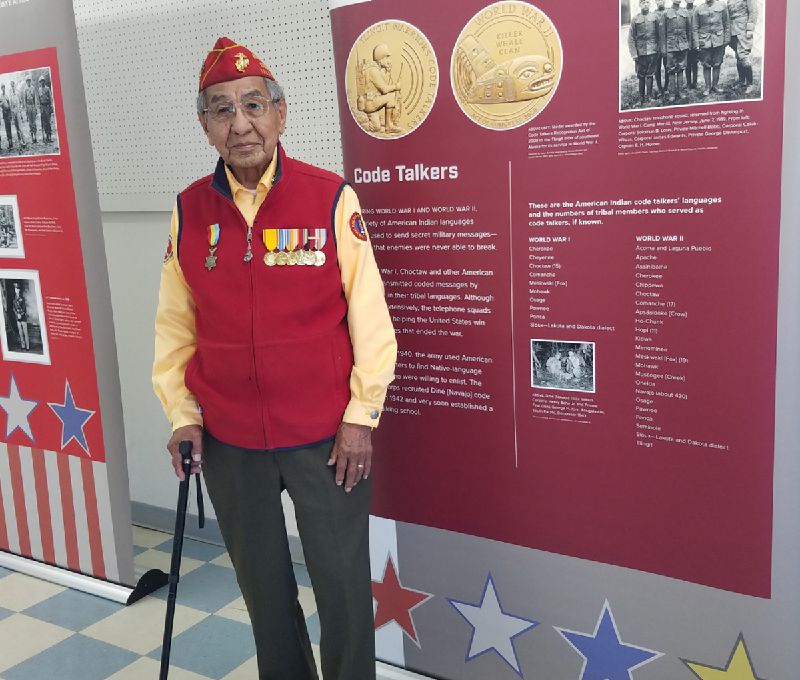 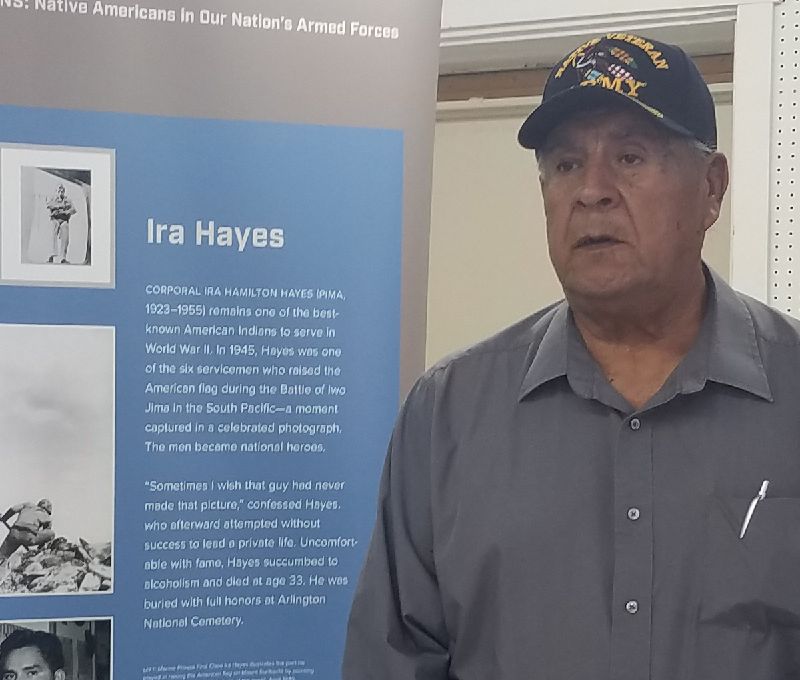 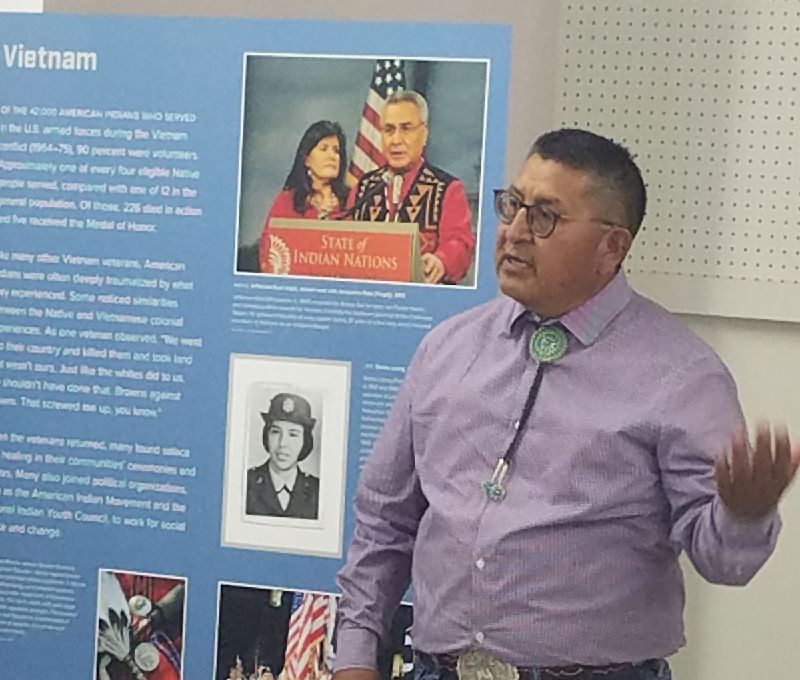 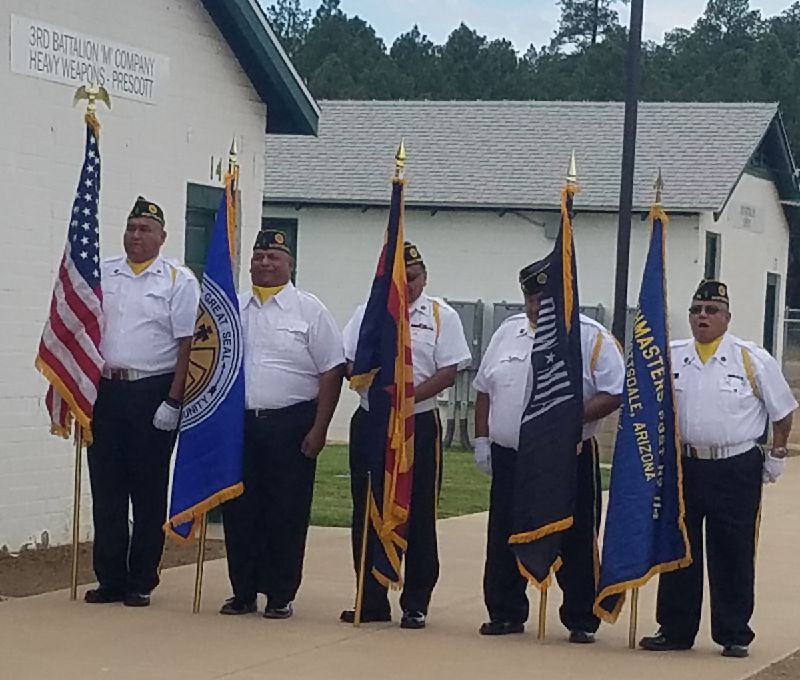 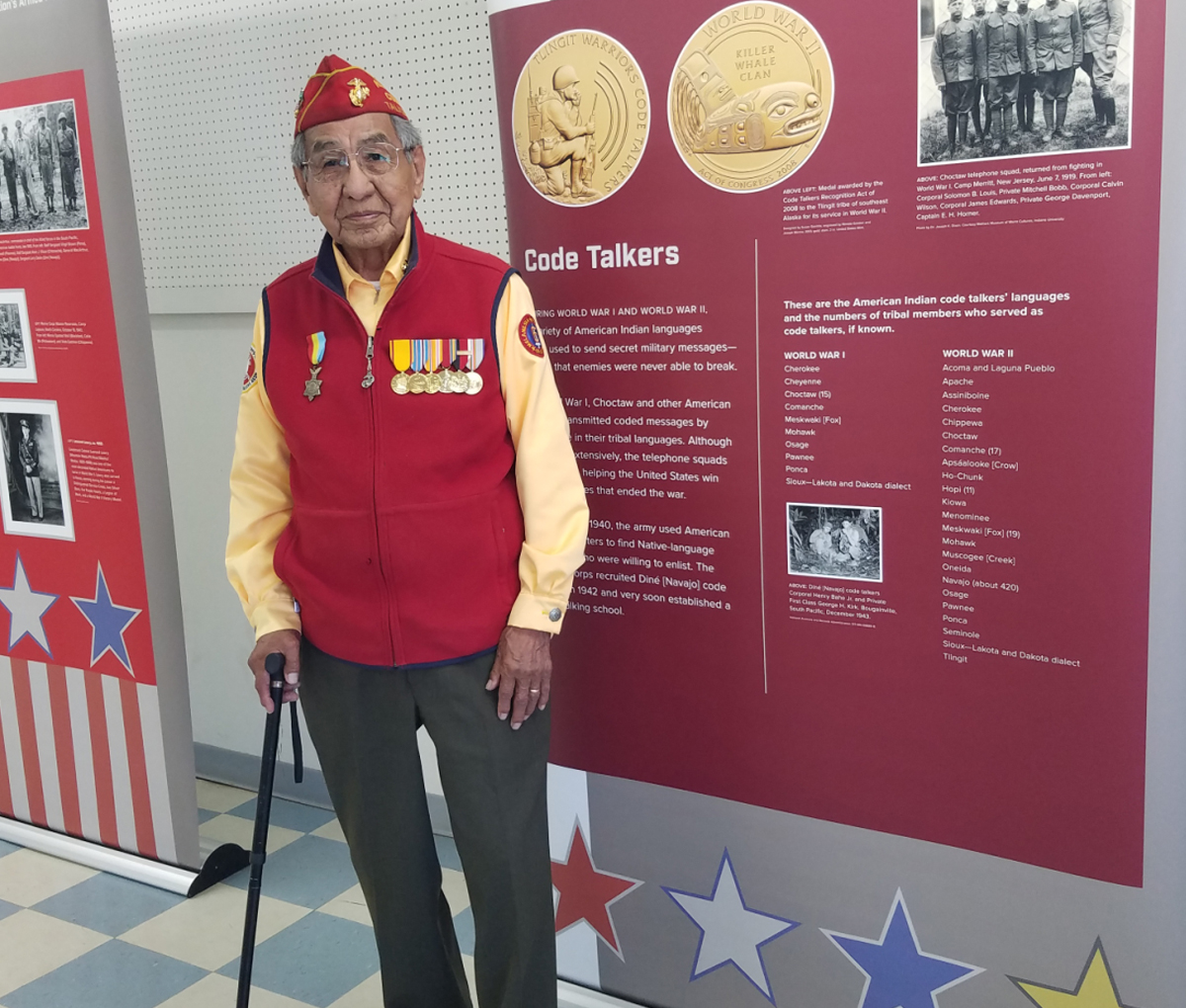 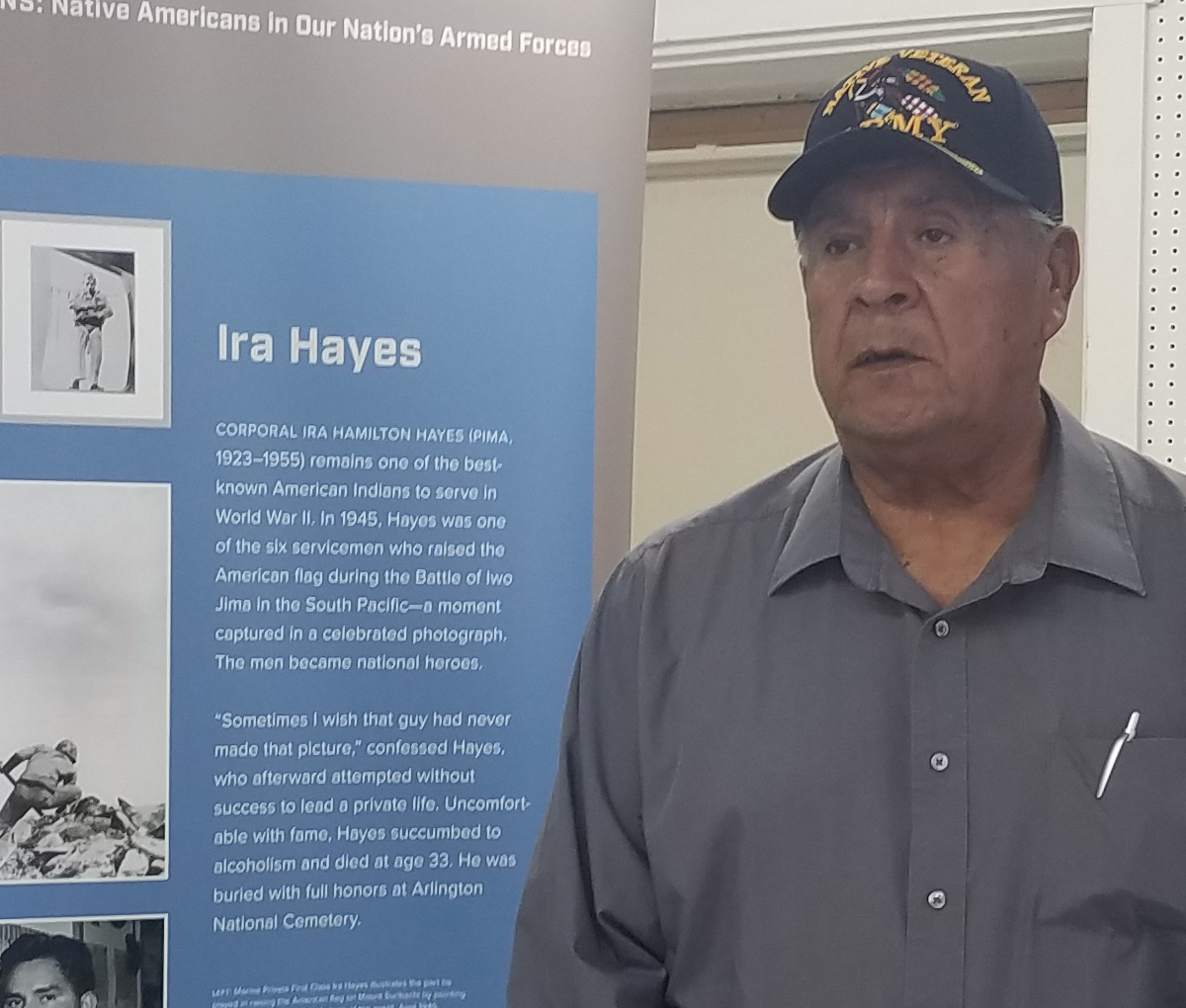 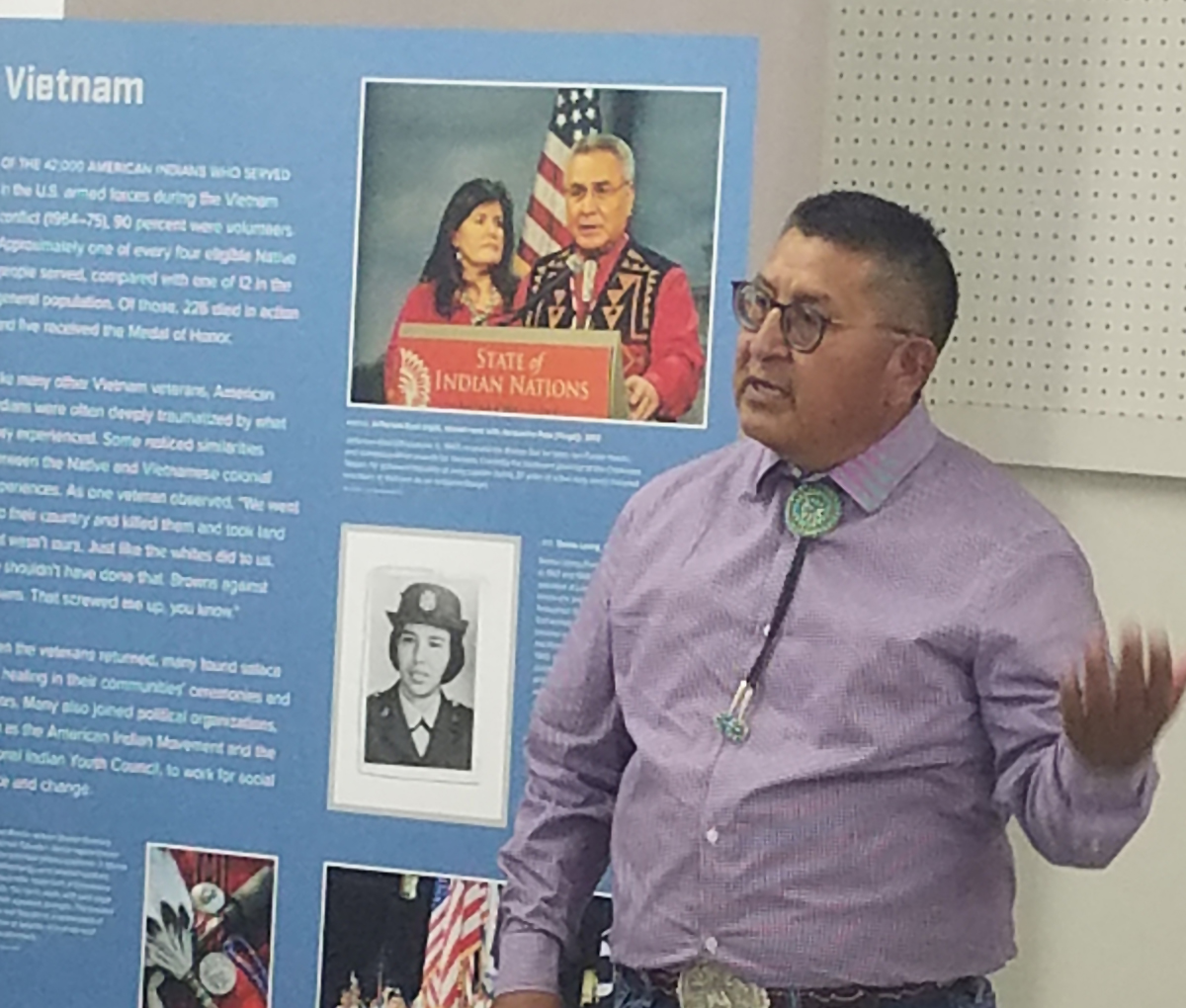 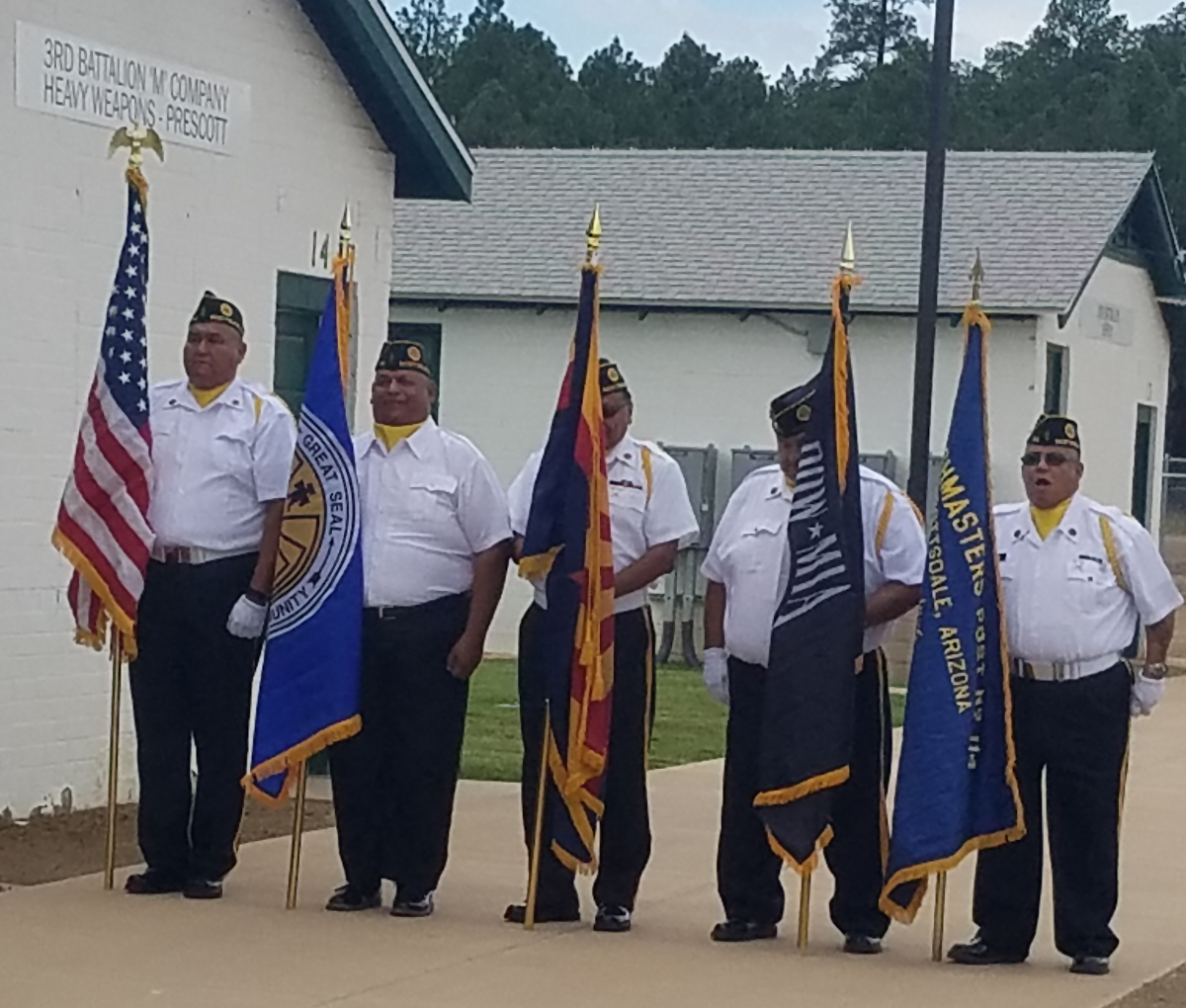 The Fort Tuthill Military Museum (FTMM) participated in the Arizona Historical Society's annual convention in Flagstaff, April 21-22. Our major objective was to bring awareness of the museum to the large group of historians who were attending. The AHS Convention gave us an excellent opportunity to do this.

The Arizona Historical Society honored our request to attend and the support and consideration we received from Dr. Bruce Dinges, Executive Director, AHS, and the entire convention staff was outstanding. The AHS provided us with a display table that was placed at perhaps the best location at the convention. We were near the registartion booth where we were exposed to a high volume of traffic moving to and from the registration booth, lecture rooms and the banquet hall.

Our information table was partially set up Thursday afternoon, April 20. We erected the FTMM banner and set out the new information brochures and volunteer forms. The special pictures and sales items (hats, patches, coffee cups and Bill Mauldin cartoon booklets) were added the following morning. By the time we opened Friday morning, April 21, there was a steady stream of people stopping at the booth, asking questions and taking copies of the brochures. The same was true Saturday. We had visitors there asking questions — and swapping Bushmaster stories — the entire day.

The preeminent comment we heard was, “I never knew the museum existed.” This was followed by, "Where is it?" "What is its purpose?” and "I want to see it.” A pleasant surprise was learning several of attendees — some quite well known — had served with the 158th RCT Bushmasters earlier in their careers or had relatives who had been members. A few we knew, others we did not. As pointed out, most of our visitors had no idea there was a military museum at Fort Tuthill.

The entire FTMM staff was involved with this endeavor. From designing and producing the new and attractive brochures, assembling the eye-catching Fort Tuthill banner, transporting table displays, and having museum representatives at the display to provide information. The information and goodwill we shared with the AHS convention attendees will go a long way in establishing the FTMM as fascinating and serious museum of Arizona’s military past.

All in all Fort Tuthill Military Museum's participation at the Arizona Historical Society’s annual convention accomplished what we set out to do. It was a positive experience for us all.

The museum exists to preserve and presents over 150 years of Regimental History. The “ Bushmaster Battalion” will assure the regiments distinguished heritage and tradition continues.

Did you know? Safford Arizona's G Company received a Presidential Unit Citation for capture of a 14" gun directing 1,300 lb projectiles at the Linnaean Gulf P.I. Beachhead.